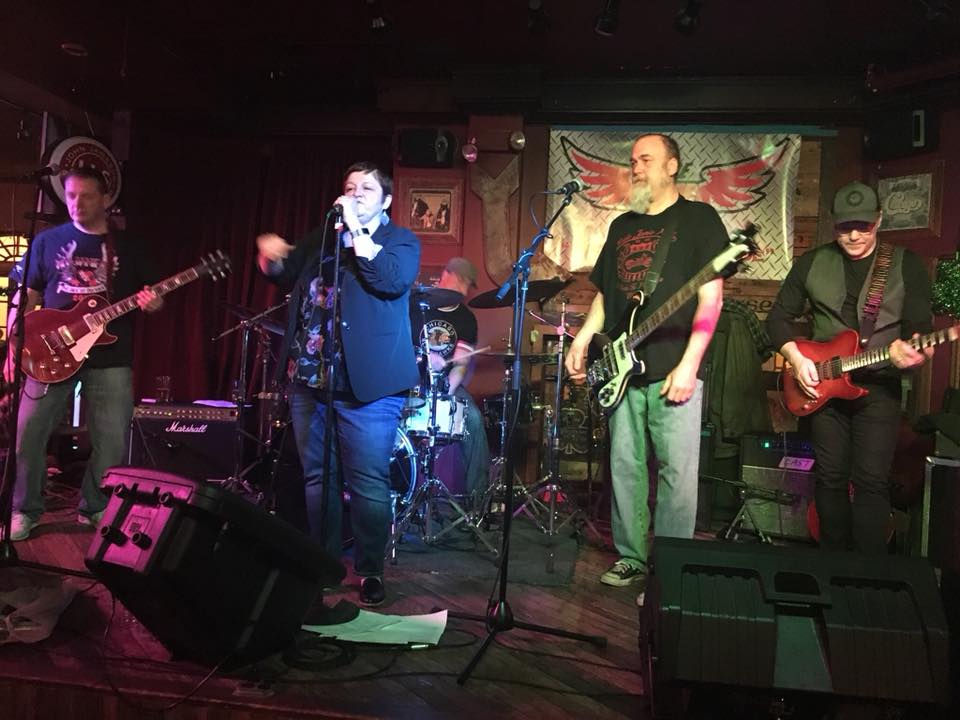 Support one of our Finest and help provide for the future care of his young children, as his family experiences the challenges of Stage IV colon cancer. All net proceeds from the sale of this shirt will go directly to the Woodruff Family Childrens' Trust, a trust established to provide for the future needs of Oliver Woodruff (3) and Simon Woodruff (1). Also, please check out our website for details on the upcoming June 23, 2018 live event and concert in DeKalb, Illinois!
Join us for dinner in DeKalb at one of our local restaurants that has committed to supporting the event, and then come to the historic and beautiful Egyptian Theater for a fantastic concert with Luxury Pork, a band covering rock, country and soul.  There will be light appetizers and a cash bar from well-known local establishment Fatty's at the theatre, as well as opportunities to participate in raffles and to purchase t-shirts, wristbands and other merchandise!  Doors open at 6:30; show starts at 7:30.

After the concert, come over to Fatty's, 1212 W. Lincoln Highway, for an afterparty and even more fun!

Commander Craig “Woody” Woodruff, a 20-year veteran with the DeKalb Police Department, has recently been diagnosed with Stage 4 Colon Cancer. In late August 2017, he visited his physician for pain in his side and some gastrointestinal problems. Early on, his doctors diagnosed diverticulitis and prescribed a number of different antibiotics, none of which alleviated his symptoms. After more than six weeks of unsuccessful antibiotic treatment, his symptoms had worsened and it was determined that he had suffered a colon perforation and it was leaking. He was hospitalized for a week and put on a “super” antibiotic for one month in preparation for surgery. During the surgery, a 5-inch section of his colon was removed.

No sign of cancer was obvious during the surgery; however, on December 5, 2017, immediately before he was to be released from the hospital, they received the devastating news that a pathology test indicated that cancer was found. Since the diagnosis, Woody has opted for chemotherapy. The plan is for 12 treatments of chemotherapy, which may be followed up with an immunotherapy plan. Every two weeks Woody goes in for a treatment lasting 5-6 hours and then wears a chemotherapy pump for two more days to boost the treatment.

We are happy to report that his treatments are going well at this time. The Woodruffs are focusing their efforts on keeping life as normal as possible. Woody and his wife, Megan, are both thankful that the Police Department (especially Chief Lowery and Deputy Chief Petragallo) and Megan’s employer have been so incredibly supportive of Woody’s treatment schedule. All proceeds will be deposited into The Woodruff Family Children’s Trust for the benefit of the Woodruff children. Please keep Woody, his wife Meagan, and their sons, Oliver (3) and Simon (1) in your thoughts and prayers and thank you for your support.